The Goulash Is About To Hit The Fan

Four names come straight to mind, Gillard, Rudd, Bishop (Julie) and Turnbull. We at AIM have known about all this money laundering that has been going on for quite some time now but lack the evidence. It appears the Clinton Foundation is about to go under in a very big way and a lot of Australian politicians will be implicated. Be prepared for it, there are none you can trust. AIM are ready. It will also spell the end of the United Nations.

To all our long-suffering supporters!

For obvious reasons I won’t be going into too much detail in this brief note to you.

There’s been a seismic shift in the US since President Trump’s acquittal.

The Trump administration and those close to it are now much more determined to bring justice to the Dems and their hangers-on, that is the people who brought us the likes of the Russia hoax, the Hillary emails scandal, the corrupt Clinton Foundation, Hillary’s pay-to-play and similar offences against public trust.

I know that, because Charles Ortel has been newly engaged at a VERY high level.

I can’t tell you the content of our discussions but I can tell you how I feel about it.

There’s raw anger in the Administration that’s being channeled and focussed in the pursuit of crooks.

There’s a sense of urgency, of impetus and a very powerful blowback against the corruption in US politics.

I have some action points over the next few days.

I know that Australian politicians who’ve channeled taxpayer money to the corrupt Clinton Foundation have committed crimes against Australian law.

I expect that the US actions underway will have very real consequences for those Australian politicians.

Now is the time to put the foot to the floor and that is what I’m doing.

The only time the bad guys win is when we give up.

I’ll keep you as informed as possible. 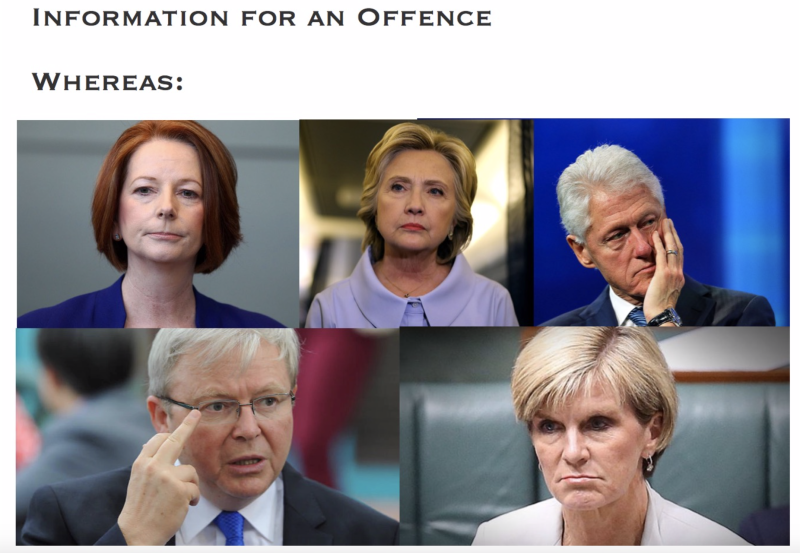 Your feedback is very important to us, it helps us with direction